Brain implants let you ‘type’ with your mind 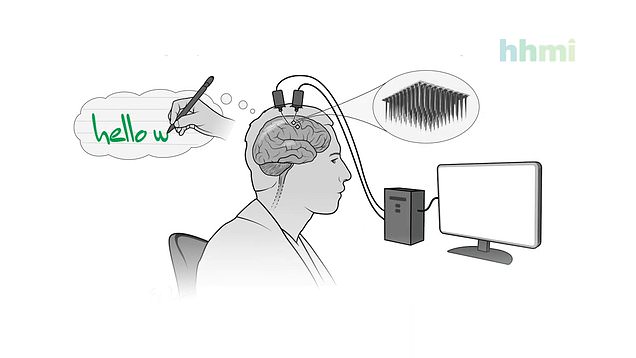 If you thought a monkey playing Pong with its mind was impressive, you’ll be amazed by a new system that can ‘type’ your thoughts.

Scientists at Stanford University in the USA have developed a ‘brain-computer interface’ (BCI) that converts mental handwriting into words on a screen.

It’s hoped the technology will eventually help people with disabilities communicate with their mind.

The system uses sensors implanted in the brain to monitor the signals produced when a user imagines writing with a pen.

An algorithm then decodes these neural signals to work out what letters the user is trying to write.

These letters are then displayed onscreen in realtime.

The researchers tested their system out on a 65-year-old man who was paralysed from the neck down because of a spinal injury.

The man was able to ‘type’ at a speed of 90 characters a minute. This is almost as fast as someone of his age would type on a smartphone, the team said.

It’s also more than twice the rate of the previous record for a brain-computer interface typing.

Not only was it fast, but the typing was highly accurate. The text was more than 94% accurate at this speed, rising to 99% when an autocorrect system was used.

The team previously developed similar technology that allowed users to ‘point’ and ‘click’ with their minds.

This allowed users to type at a then-record rate of about 40 characters per minute.

Neuroscientist and research specialist Frank Willett, who worked on the project, said: ‘We want to find new ways of letting people communicate faster.’

Researcher Krishna V Shenoy added: ‘Having those two or three modes and switching between them is something we naturally do.’

University of California neural engineer Jose Carmena, who was not involved in the study, said the finders were ‘a big advancement in the field.’

He added that the paper published this week in the journal Nature was ‘a perfect example’ of brain-computer interfaces that translate thoughts into action.

But he emphasised the research was still at a preliminary stage.

Shenoy’s team next plan on working with participants who are unable to speak.

They hope the technology will eventually be able to help people who have disabling conditions like motor neurone disease; a degenerative condition that can lead to speech loss.

Elon Musk made headlines last month when his company Neuralink dropped an impressive video of a monkey playing retro arcade game Pong with its mind.

But the company has so far published limited scientific data on its technology.