CORONAVIRUS infections have fallen in the UK by 66 per cent in the last month, new data has revealed.

A further 31,933 people tested positive today, down from 94,326 infections this time last month.

Daily coronavirus cases have fallen again today, and are down 66 per cent on last month’s rates[/caption] 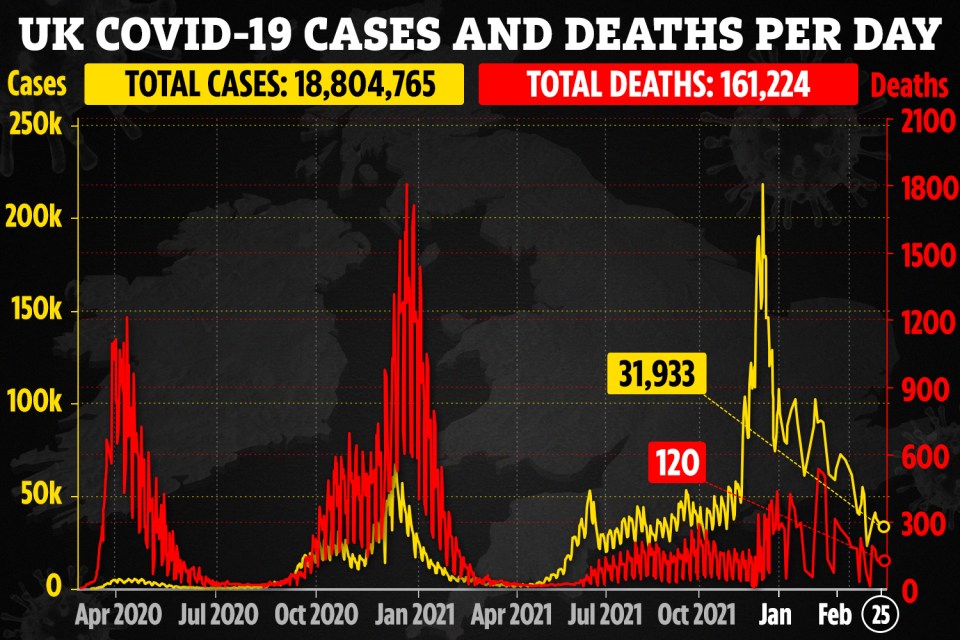 Daily cases are also down 33 per cent on last week, when 47,685 people tested positive.

Sadly, a further 120 people have lost their lives 28 days after a positive test, which is dramatic drop from 439 deaths this time last month and 158 deaths recorded this time last week.

The R rate in England has dropped slightly as cases continue to fall and now sits between 0.7 and 1, down from 0.8 to 1 last week.

The UK Health Security Agency (UKHSA) said that an R value between 0.7 and 1.0 means that, on average, every 10 people infected will infect between 7 and 10 other people.

The growth rate in England is currently between -4 per cent and -1 per cent which means that the number of new infections could be shrinking by up to 4 per cent every day.

The R rate is currently the lowest in the East of England, the Midlands, the North East and Yorkshire and the North West at 0.7 to 0.9.

Despite a fall in cases, one expert has said that the true number of infections could be much higher.

Professor Tim Spector who heads up the ZOE Symptom Tracker app said daily infections reported through the app are much higher than those expressed in government data.

Posting to Twitter, he said that daily cases are actually closer to 150,000 infections.

His comments come after it was revealed that Omicron has now been taken over by a faster-spreading sub-variant.

After growing to dominance over Christmas, the strain has now been overthrown by a “stealth sister”.

Known as BA.2, the strain spreads an estimated 30 to 60 per cent faster than the original Omicron (BA.1).

Dr Susan Hopkins, Chief Medical Advisor for the UK Health and Security Agency (UKHSA), said: “We now know that BA.2 has an increased growth rate which can be seen in all regions in England.

“We have also learnt that BA.2 has a slightly higher secondary attack rate than BA.1 in households.

“Although hospitalisations and deaths remain low, cases are still high in some areas and some age groups so it’s important that we continue to act cautiously as restrictions are lifted.

“Consider wearing a face covering when in crowded places. Take a vaccine to protect yourself against Covid-19. If you have any symptoms, take a test.”

Multiple studies have shown that both Omicron strains are milder compared to the Delta strain, which came before.

Catching the new Omicron bug should not put you at any more risk of hospitalisation compared to previous strains.

It therefore is not deemed a threat to the UK’s recovery from Covid – but there will be more variants in the future, which could shake things up again.

The best way to protect yourself from Covid is to get a booster vaccine, with two doses no longer considered effective.

Two doses are nine and 13 per cent protective against symptomatic disease respectively for BA.1 and BA.2.

People who had Omicron over Christmas are now eligible to get their top-up dose. Before now, they would have been warned that a vaccine dose shouldn’t be given until 90 days after Covid illness.

There is no indications the symptoms of the new super-strain are different to Omicron.

Is this going to hurt? How sanctions on Russia could prove a mixed bag

Do you have a nature hero? How children and young people can #PlantForOurPlanet

Universities Minister Michelle Donelan: What I wish I knew about uni before I started