YOU’D be forgiven for wanting to staycation in the UK this summer, what with flight delays and soaring holiday prices when going abroad.

Luckily, some of the country’s most incredible holiday homes for families and friends have been scouted out, from Scottish estates to Cotswolds lodges.

Holiday rental platform Vrbo has revealed their first ever ‘Holiday Homes of the Year’ in the UK – having previously run the awards in New Zealand and Australia.

The awards look at everything from the number of bookings to five-star ratings.

Vrbo’s Karen Mullins said: “The successful properties have a proven track record of earning excellent ratings and reviews, and the hosts who own and manage these places are dedicated to going above and beyond for their guests.

“They also offer a wide range of features to cater for a variety of needs and preferences, whether that’s direct access to the beach, outdoor living with a hot tub or cots for young families.”

Here’s some of the top holiday homes – featuring everything from heated swimming pools to your own staff and plush games rooms. 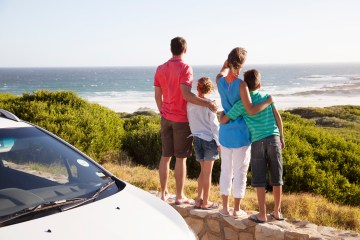 The countryside hideaway Thursford Castle is found in between the villages of Thursford and – the brilliantly named – Great Snoring.

Once featured on Grand Designs, the restored romantic Gothic chapel features a wood burning stove and is just a 15-minute drive from the sea.

It sleeps eight, with four bedrooms, and starts from £3,942.57 for three nights.

This restored chapel is nestled into the Norfolk countryside[/caption]

The Scotland End Barn sits on the edge of the Oxfordshire village of Hook Norton – with amazing views and just a short walk to the pub.

On-site is a dedicated games room and huge glass doors that open out to a terrace where you can enjoy some of the stunning sunsets.

The five-bedroom property sleeps ten and started from £1,548.40 for two nights.

Near the town of Tenby lies Penally Manor, a Grade II listed building built back in 1840 – and it has some of the vast sea views.

There is your own bar, games area with pool table and the opportunity to get in professional caterers if you don’t fancy cooking.

There are a whopping 14 bedrooms which sleep 25 people, and starts from £5,324 for three nights.

There’s plenty of luxurious details at this Welsh manor[/caption]


Inside travel chaos at Manchester Airport as CEO gets £500,000 bonus


Passport warning as easy mistake could get you banned from Europe


Another airline scraps hundreds of flights this summer

Close to the town of Kilmarnock in Scotland is a 500-year-old castle from the Wallace Clan that is set on the Ayrshire Estate – which includes a tennis court and croquet lawn on the 2,00 acres of land.

Just like the Queen’s Balmoral home elsewhere in Scotland, there’s a full household of staff to cater to the needs of you and your guests, who can help you with everything from meals to sampling some on-site shooting.

Enjoy your own Scottish estate for the night[/caption]

Cliff House is found near Newquay in Cornwall and has direct access to Crantock beach.

Included across the 4,500sqft is an indoor swimming pool, outdoor hot tub, gym, as well as a kitchen with a wine fridge.

This Newquay property is perfect for swimming fans[/caption]

The Staffordshire cottage is perfect for privacy – found behind secure electric gates – and has three acres of space, perfect for large groups.

There is a large patio area with plenty of seating, a cosy fire pit, a hot tub and a waterfall feature surrounded by manicured gardens and woodland area, as well as a children’s trampoline.

Relax in style at this family-friendly option[/caption]

If you’re wanting somewhere huge to stay, then Goodlake Barns in the village of Shellingford in Oxfordshire is an ideal option – being made up of five cottages and a central barn to share.

Each cottage is accessible via a central courtyard and has a fully equipped kitchen and sitting room as well as smart TVs.

Also included is the is newly-renovated Cedar Lodge, with amazing views of the Carneddau mountain range.

This lodge comes with a heated outdoor pool[/caption]