A further 57,623 people tested positive for the virus today, a huge drop from last Monday’s total of 92,368 daily infections. 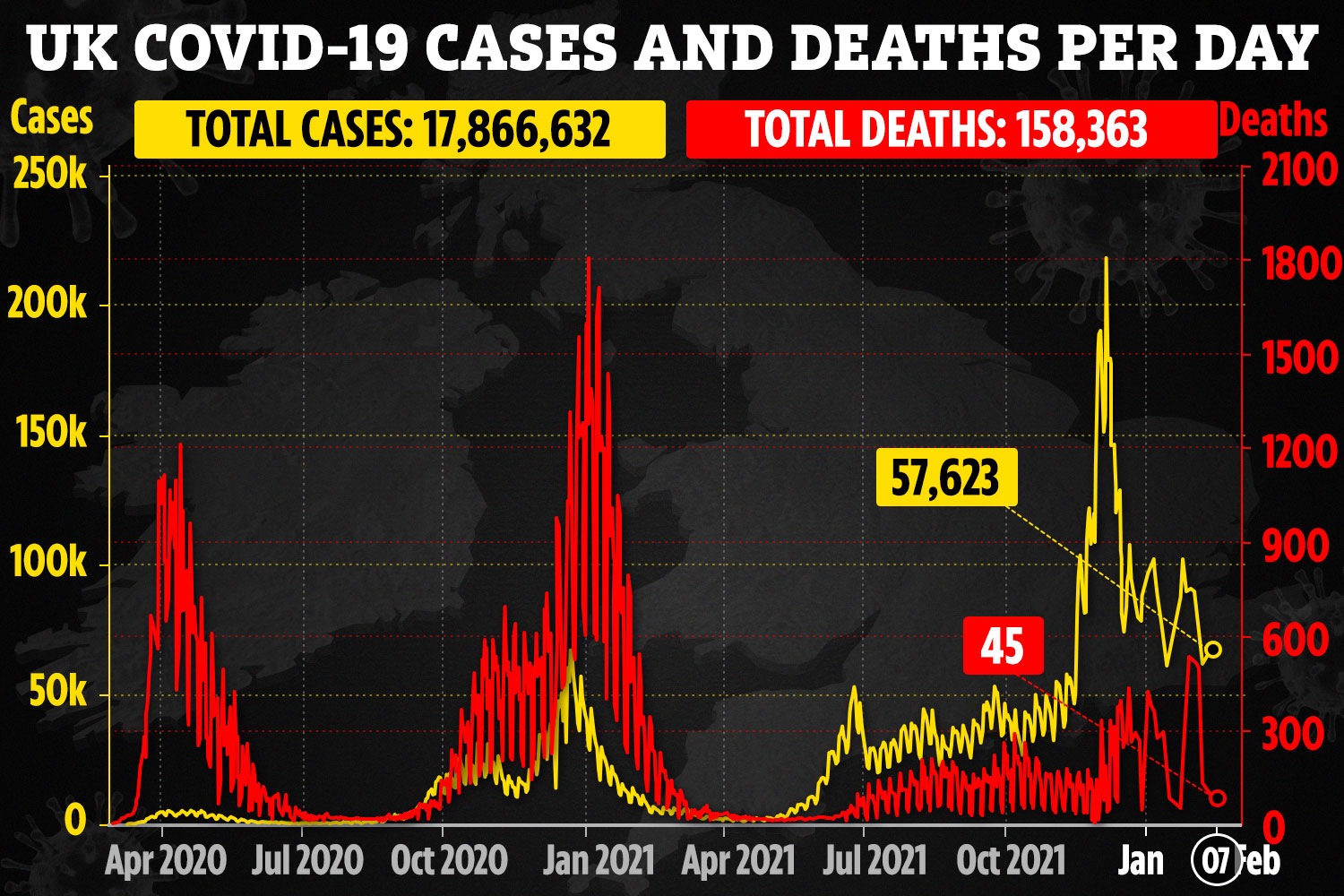 Over the weekend cases continued to fall, with a further 60,578 cases being reported on Saturday and 54,095 on Sunday – both lower than Friday’s infection total of 84,053.

However death rates were slightly higher on Saturday at 259, up from 254 on Friday, with a further 75 deaths reported on Sunday.

Today a further 45 deaths were reported 28 days after a positive coronavirus test result.

It was reported over the weekend that the number of patients in intensive care units has also dropped dramatically.

New figures show Omicron is failing to cause serious illness among most vaccinated Brits.


I shed staggering 7 stone WITHOUT stepping foot inside a gym

At the peak of the second wave in January last year, there were a staggering 400 people a day being admitted.

Professor David Harrison, the centre’s head statistician, said despite a lag in reporting, patients at the end of January will still only be in the region of 20 to 30.

In another glimmer of hope, 425 patients are on mechanically ventilated beds in England – the lowest level since July 11.

Most people who catch the dominant strain, Omicron, say they experience cold-like symptoms, with some even complaining of stomach problems.

However experts say that while some people have reported stomach issues, this was more likely to be down to other winter bugs, such as the norovirus.

Health officials have repeatedly said that getting vaccinated is the best way to protect from severe illness from Covid.

It was today revealed that “hundreds of thousands of people” may have died due to false criticism of the Oxford/AstraZeneca vaccines.

Three vaccines have been rolled out across the country, the Pfizer/BioNTech, the Moderna and the Oxford/AstraZeneca jab.

Sir John Bell, at the heart of the project to launch the life-saving vaccine, has slammed EU politicians who caused confusion over safety last year.

Ahead of a BBC documentary on the vaccine, Sir John said scientists and politicians “probably killed hundreds of thousands of people” by seeding doubt in the jab.

He added: “They have damaged the reputation of the vaccine in a way that echoes around the rest of the world.

“I think bad behaviour from scientists and from politicians has probably killed hundreds of thousands of people – and that they cannot be proud of.”

Just as the British-made vaccine was being rolled out across the world last year in an effort to dent Covid numbers, multiple European nations paused use of it over blood-clot fears.

Most countries U-turned and resumed vaccinations after the EMA said the jab was “safe and effective”.

‘The Big Ask’ Survey – The Findings

Assassin’s Creed games in order: By release date and timeline

The metaverse, cookies and sustainability: Experts reveal their 2022 marketing trends