Justin Sun, Founder of TRON, today revealed that he won bid for the first seat on Blue Origin’s Inaugural New Shepard rocket. The full bid amount of $28 million went to Blue Origin’s foundation Club for the Future, which in turn benefited 19 space-based charities to inspire future generations to pursue careers in STEM and help invent the future of life in space. Sun came to an agreement to take five additional crewmates with him on his new voyage. 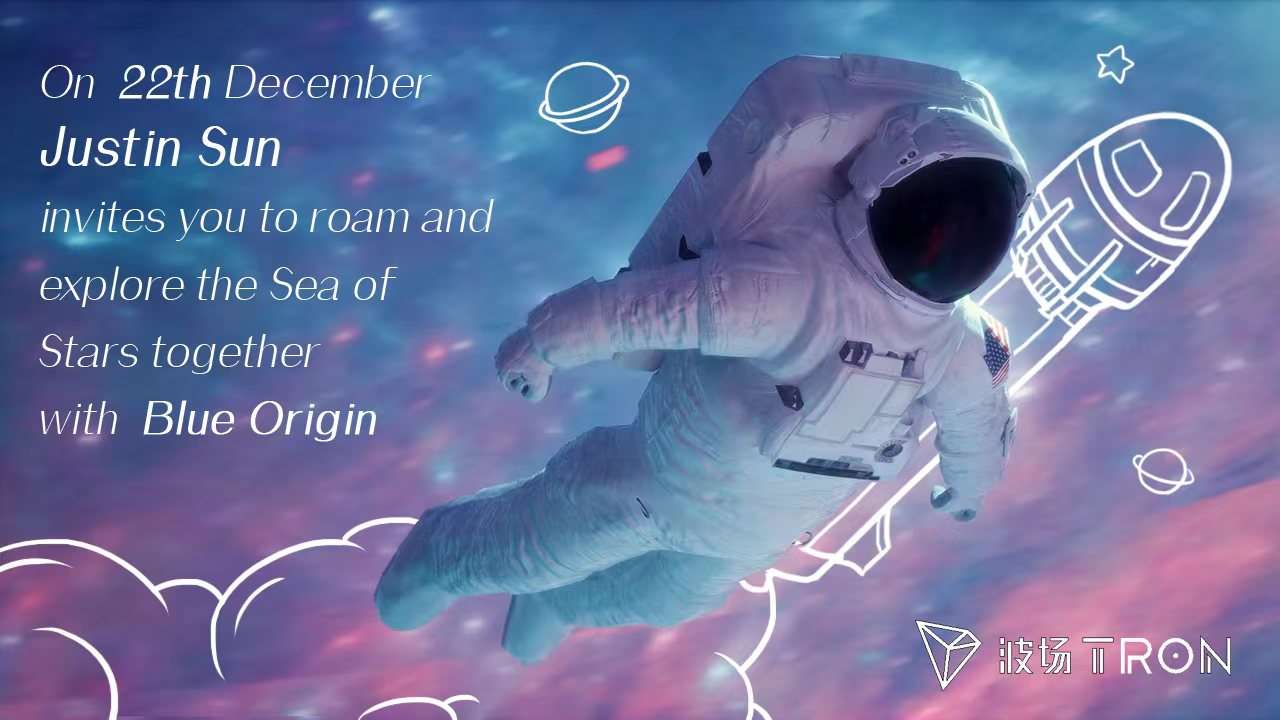 Blue Origin, founded by Amazon founder Jeff Bezos in 2000, began testing the New Shepard spacecraft in 2015 and successfully completed its first manned space flight on July 20 this year, and returning from a suborbital space above 100 kilometers. The entire flight lasted 11 minutes and stayed about 1 minute above the “Carmen Line”, becoming the first manned space trip without a pilot in human history.

As an iconic figure in the blockchain industry, Justin Sun founded TRON public chain, which is one of the world’s three major public chains with over 66 million users. Justin Sun said that with the rapid development of commercial aerospace, entering space may become a dream that every person can realize in his lifetime. We are entering the era of great spaceflight. This great journey requires more people to get involved.

It is reported that while the demand for space tourism is strong and growing, the market supply is seriously insufficient. Although more than 500 people have been to space, very few ordinary tourists have flown over the Carmen Line in private spacecraft. In addition, it is estimated that by 2029, space and satellite infrastructure, applications and satellite connectivity revenues will exceed 1 trillion dollars. The global aerospace industry has entered a period of rapid growth.

Justin Sun said in an interview that commercial spaceflight is a very huge market with many significant opportunities, and more resources will be invested in this field in the future.

As part of his new voyage, Sun is launching the “Sea of Stars” campaign named after the Chinese idiom “Xing Chen Da Hai,” to convey that Earth is where the chapter of human life starts for our future generations, not where it ends. Space is truly our final frontier, and we shall boldly go into that boundless Sea of Stars, to where no man has ever gone before. Sun and his five selected crewmates will fly on a New Shepard flight in Q4 of 2022. Sun will personally select the five men and women to travel with him over the coming months by releasing a name every two months. One of five crewmates will be chosen from Tron Dao Community. Each person selected will hold an outstanding status in their own field while having a strong will to explore space. Representative fields will include fashion, art, technology, space exploration, and entrepreneurship.

“With the rapid development of commercial aerospace, entering space may become a dream that every person can realize in his or her lifetime. We are entering the era of great spaceflight. This great journey requires more people to get involved,” said Justin Sun, Founder of TRON. “The initiative of Blue Origin to take more people to space to see Earth as our singular common home is extraordinary. Club for the Future offers a way to use that experience to inspire youth around the world to dream and act on their dreams of science, technology, and space exploration. I felt compelled to help further that vision through my bid.”

Staying safe over the festive period

Will Boris Johnson be forced out? The latest Conservative MP numbers