Erasmus, 49, immediately tried to rectify the situation claiming he deleted the retweet and reported the issue.

But hours later the content was still visible on his Twitter timeline – sparking a furore on social media.

Many tried to help out Erasmus and offered technical advice on how to get rid of the content.

Some told the South Africa Director of Rugby to change his password – to prevent the hacker from reposting the content as Erasmus alleged.

Immediately after the video surfaced Erasmus tweeted: “Sorry guys about that inappropriate tweets!! The handle has been hacked!! 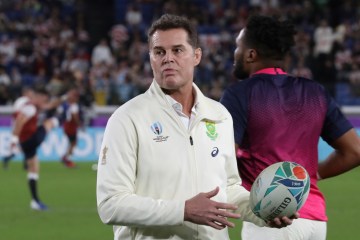 He then posted an update after the content remained on his page, adding: “Guys the hackers still seem to have the retweet from earlier appearing in some places although it has been deleted on my side and reported. Hopefully my account will be sorted shortly.

“Guys and ladies thanks for the advice to undo the retweet!! It is deleted on my account, but I did not retweet it!! The moment I delete it pops up again somewhere else! Appreciate the concern.”

Unfortunately for Erasmus it is not the first time he has got into hot water over his behaviour online.

In July last year he was accused of running a “burner account” on Twitter to put pressure on the British Lions.

After the First Test Erasmus highlighted 26 refereeing mistakes and was later condemned by Australia Rugby for doing so.

They said: “Rugby Australia has noted with dismay and concern the recent public commentary by South African director of rugby Rassie Erasmus, regarding Australian referee Nic Berry and other match officials.

“There is no place for abuse of match officials in Australian Rugby, with Rugby Australia committed to promoting a fair, safe and inclusive Rugby experience for all participants, officials and fans.

“Rugby Australia believes the recent actions are unacceptable and against the spirit and values of the game.”

The rise of the CMO: Research reveals growth of boardroom marketing roles

What is the triple lock pension and will it be scrapped?