EVERY mum deserves to be spoiled on Mother’s Day – and cooking up a feast in the kitchen while she takes a break is a great way to show your love.

If you need some inspiration, there are 100 delicious recipes in Pinch Of Nom Comfort Food, the latest book from bloggers Kate Allinson and Kay Featherstone.

The dishes are guaranteed to put you in Mum’s good books for the rest of the year.

And what’s more, they are healthy too.

In an exclusive extract, here we reveal five recipes to create the perfect lunch for someone special. 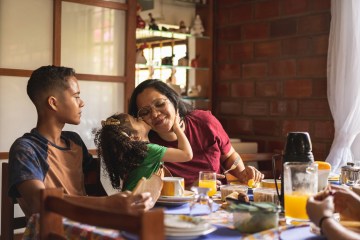 Why is Mother’s Day on a different date in every country? 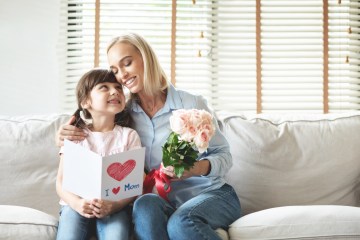 THIS is inspired by the fish chowder that is popular in New England. It’s a comforting, chunky fish soup that’s bursting with seafood flavours.


Queen, 95, starts using £62k gizmo-packed golf buggy to help her get around


Optical illusion reveals your secret aspirations – what do you see first?


I'm an interior designer, the decor mistakes which cheapen your home

METHOD: Spray a large lidded saucepan with low-calorie cooking spray and place over a medium heat.

Add the potato, fish stock, bay leaf and thyme, bring to the boil, then reduce the heat. Cover and simmer for 20 minutes, until the potato is tender.

Add the haddock, cod, prawns, sweetcorn and milk and simmer over a low heat for ten to 15 minutes, until the fish is opaque and beginning to flake.

Remove from the heat and stir in the cream cheese.

Add the lemon juice, remove the bay leaf and any thyme stalks, taste and season with salt and pepper if needed.

JUST when you thought a classic ­cauliflower cheese couldn’t get any better, we’ve added tender cauliflower to a silky cheese sauce and topped it with a crunchy breadcrumb mix.

Cook the ­cauliflower in a saucepan of boiling water for eight to ten minutes, until just soft, then drain well.

While the cauliflower is cooking, spray a frying pan with low-calorie cooking spray and place over a low heat.

Add the onion and garlic and fry for five minutes until lightly golden and soft. Remove from the heat and set to one side.

Put the flour and 100ml of the milk in a small saucepan and place over a low heat, whisking for one to two minutes until it starts to thicken.

Then add another 100ml milk and again whisk and heat for one to two ­minutes until it starts to thicken.

Add the final 100ml milk and heat for one to two minutes until thickened, then add the mustard and sriracha.

Whisk in the cream cheese, then add the grated cheeses and whisk until melted and the sauce is creamy. Season with salt and pepper.

Place the drained cauliflower into an ovenproof dish, stir in the onion and ­garlic and pour over the cheese sauce.

Blitz the bread for the topping to a crumb in a food processor (or use a grater), place in a bowl and stir in the grated Cheddar.

Sprinkle the crumb over the cauliflower cheese and pop in the oven for ten minutes until the top is crispy and golden.

Sprinkle with the spring onion if using, and serve.

WHETHER you are a Marmite lover or a hater, we guarantee you’ll love the savoury, distinctive flavour of these crispy roast potatoes.

Once you’ve tried this simple side dish, you may never go back.

Boil the potatoes in a saucepan of salted water for ten to 15 minutes until just soft but still holding their shape.

Drain in a colander and leave for five minutes, then toss gently in the ­colander to fluff up the edges.

Mix the Marmite and boiling water in a small bowl.

Put the potatoes on a baking tray and spray with plenty of low-calorie cooking spray, then add the Marmite mixture and shake the tray to coat the potatoes. Roast for 15 minutes.

Remove from the oven, spray again with low-calorie cooking spray, and roast for 15 more minutes until golden and crispy.

AIR FRYER METHOD (25 mins): Boil the potatoes in a saucepan of salted water for ten to 15 minutes until just soft but still holding their shape.

Drain in a colander and leave for five minutes, then toss gently in the colander to fluff up the edges.

Mix the Marmite and boiling water in a small bowl. Preheat the air fryer to 190C.

Add to the air fryer, spray with plenty of low-calorie cooking spray, and cook for 15 minutes until golden brown and crispy.

OUR one-pot Sunday beef is a tasty alternative to a traditional Sunday lunch.

The beef is deliciously tender and, as it produces its own gravy as it cooks, the potatoes, parsnips and carrots are super-full of flavour, too.

METHOD: Preheat the oven to 180C/160C fan/gas mark 4. Spray a large frying pan with low-calorie cooking spray and place over a high heat.

Add the beef joint (string on) and sear for about a minute on each side until lightly browned. Transfer to a large casserole dish.

Reduce the heat and spray the frying pan again with low-calorie cooking spray.

Add the onion and cook for about ten minutes, until the onions are softening and are lightly golden, scraping any meaty bits off the bottom of the frying pan and stirring them into the onion.

Add the garlic for the last two minutes.

Add the onion and garlic to the beef in the casserole dish along with the potatoes, parsnip and carrots.

Stir, then add to the beef and veg in the casserole dish and cover tightly with a lid.

Cook in the preheated oven for 3½ hours, or until the beef is tender.

Check occasionally that there is enough stock and add a little boiling water if needed.

Remove the beef from the casserole dish, wrap it in foil and leave it to stand for five minutes.

Using a slotted spoon, remove the potatoes, parsnip and carrots from the casserole dish and place them on a large, warmed serving plate, leaving the onions in the cooking liquid.

Remove the bay leaves from the cooking liquid and discard.

Using a stick blender, blitz the cooking liquid, onions and any other small pieces of cooked vegetables that may still be in the casserole dish until smooth, to form the gravy.

Taste the gravy and season with salt and pepper if needed.

Unwrap the beef, remove the string, and cut it into slices using a large serrated knife.

WITH a crunchy crust and stuffed with juicy cherries, it’s no wonder cherry pie is one of the nation’s favourites.

We’ve used a surprising ingredient instead of shortcrust pastry to make the pie case, keeping the calories low while making sure it looks amazing on the table.

Place a wrap in the dish and press it in so the edges form a shallow rim around the dish.

Make three or four small snips around the edge to help mould the sides of the pie case into the dish if you need to.

Press any snipped sections firmly together to seal.

Part-bake the pie case for 12-15 minutes. Only the middle should be crisp and the whole case should be white.

Place a sieve over a measuring jug.

Pour the defrosted cherries and juice into the sieve and let the juice drain into the jug.

Place the drained cherries in a small saucepan. Measure the juice in the jug and if you have less than 150ml, make it up to 150ml with water.

If you have more than 150ml of juice, drain some off until you are left with 150ml juice.

Pour the juice into the saucepan with the cherries and taste – frozen cherries can vary in sweetness, so add sweetener to taste, stirring it into the fruit.

Place over a medium heat, stir in the cornflour mixture and simmer gently for three to five minutes, until thickened and glossy. Set aside.

Place the remaining wrap on the surface and cut out 12 x 1cm-wide strips across the width of the wrap. Brush with beaten egg.

Spread the filling out evenly in the part-baked case. Brush beaten egg around the case edge.

Place six strips across the top of the pie at equal intervals, glazed-side up, trimming to fit by snipping off any excess with scissors.

Gently press into place on the egg-washed pie edge. Repeat with the six remaining strips, placing them over the first six strips in a criss-cross formation to make a lattice.

Bake for eight to ten minutes or until golden. Remove from the heat and leave to stand for five minutes, then serve alone or with a swirl of whipped cream.

More than 600,000 Brits invited to get spring Covid booster jab in days

More than 600,000 Brits will be invited to get their spring Covid booster jab in just days

Man searches for teenage sweetheart he met on holiday 12 years ago, after finding old love letters

The Ukraine crisis is so far, not impacting on UK opinion polls

Vista MD: 'The minute a campaign doesn’t feel it’s engaging with me as an individual, I turn off'