A FURTHER 67,159 people in the UK have tested positive for Covid-19 today, data has revealed.

It’s up from yesterday’s total daily infections of 61,900, with an increase of 52 per cent on last week’s daily toll. 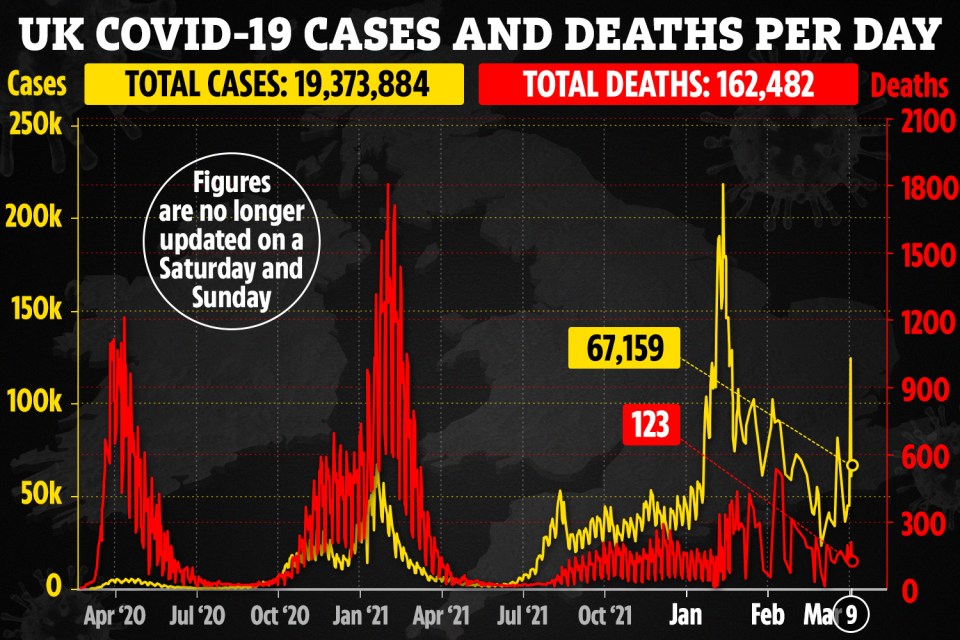 Sadly a further 123 people have lost their lives, 28 days after a positive test was confirmed.

It comes after data revealed that Covid hospital admission are rising in some areas of the country.

Health chiefs have said that the rise in hospitalisation is due to waning immunity in the elderly population.

In the spring a vaccine booster programme will be rolled out – with the most vulnerable will be getting their fourth dose.

The weekly total of hospital admissions (8,763) is up by 11.1 per cent, the Government dashboard shows.

It’s only a small uptick, and a trend which may not continue.

However, most of those being admitted are older patients, a source involved in the government’s pandemic response told The i.

Vaccines are the best way to get through the Omicron wave, experts have repeatedly said – and slash the risk of serious illness or hospitalisation in yourself and others.

Scotland, Wales, and all seven regions in England are seeing an increase in the number of Covid patients coming through the door.

In South West England, daily admissions are higher now (155) than at the January Omicron peak (139).

South East England hospitals are seeing another 200 patients each day – the same as the start of January, when an Omicron surge occurred.

Experts do not believe that a new and more serious variant is behind the trend.

A growth in hospital cases usually follows that of infections with a lag of around two weeks.

But reported case numbers have been stable and declining for several weeks. Only yesterday, the daily Covid cases were higher than usual.

A significant reduction in testing is likely to have had an impact on the collection of data on case numbers – when fewer people are tested, fewer cases are found.

Meanwhile, hospital data collection would not have been impacted, and may now be a better signal of the epidemic.

Fracking back on the table as UK energy security fears grow

Why People Choose Clothing Brands And Why You Should Choose MakoPrime