Risk of dying from Covid is 93% lower if you’ve had your booster jab, new study shows

BOOSTED Brits have seen their risk of dying from Covid plummet by 93.4 per cent since last summer.

A new study looked at 70,000 Covid deaths in England between July and December 2021.

Mortality rates for Covid deaths were found to be “consistently lower” across all age groups for those with an extra dose, a new study from the Office for National Statistics (ONS) shows.

Around two in three Brits over the age of 12 have had their third Covid shot – while a staggering 91.1 per cent have had at least one dose.

A string of positive studies show Omicron is milder than other strains in the vaccinated.

Covid booster jabs protect against Omicron and offer the best chance to get through the pandemic, health officials have repeatedly said.

The Sun’s Jabs Army campaign is helping get the vital extra vaccines in Brits’ arms to ward off the need for any new restrictions.

For much of 2021, mortality rates for death involving Covid for people who had two doses of vaccine stayed below the same figures for unvaccinated people.


Can you spot deadly moles from the harmless ones? Skin cancer signs to never ignore


The 4 cancer symptoms a third of people are IGNORING – are you one of them?

The research also found that from July to December 2021, rates for people who had received only one dose of vaccine were similar to those for unvaccinated people, particularly for older age groups.

This was possibly because of the longer length of time since people had received a first dose, leading to waning protection from prior vaccination.

It may also be due to “the exclusion of people who had received a first and third dose but not a second dose from the analysis, because of incomplete vaccination records,” the ONS added.

It comes as daily Covid cases in the UK have fallen today – as the official R rate crept up this week and could be as high as 1.3 in some areas.

Infections fell by four per cent with another 84,053 Brits testing positive for the bug. 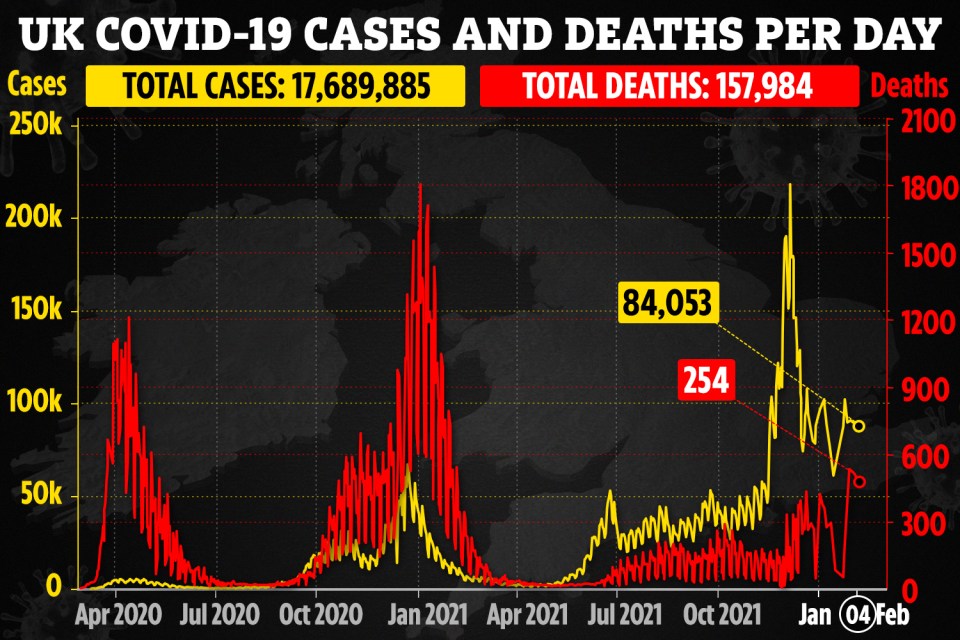 Deaths have also fallen today by 19 per cent with a further 254 being reported, down on 303 deaths yesterday.

It comes as one in 20 people in England now have Omicron, with vaccines keeping the majority of people out of hospital and free of severe infection.

Last week’s rate had been the lowest on record since March 2021, when the UK was still in lockdown after the Alpha variant had swept in over the Christmas period.

It comes as Sage experts today warned Covid may not settle into seasonality – as in becoming more like the common cold – for another decade globally.