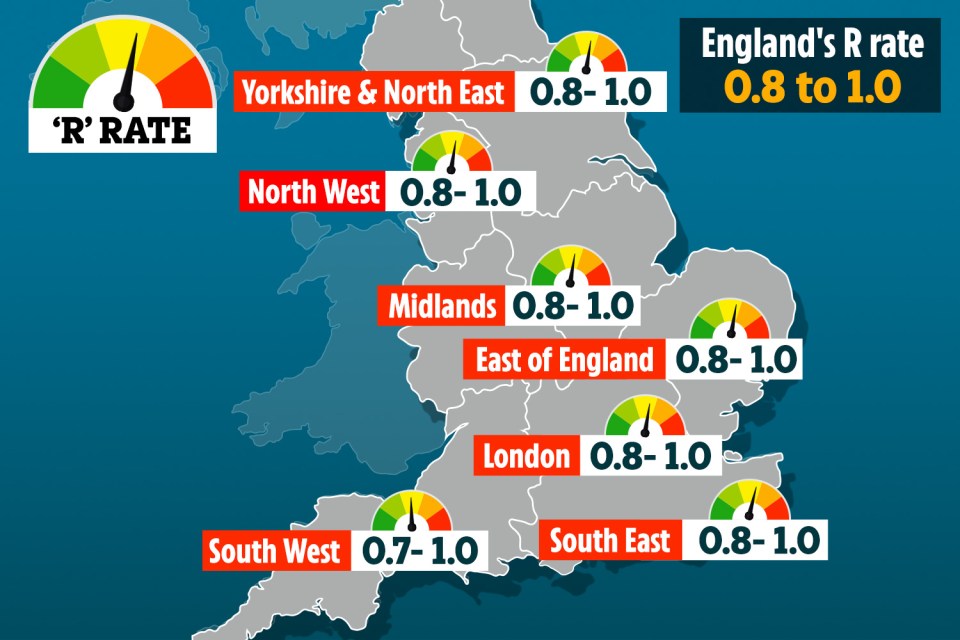 Hospital admissions have decreased in all age groups and are down to 7.44 per 100,000 people, data from the Office for National Statistics (ONS) found.

While case rates are still highest in secondary school aged kids, people who are being admitted to hospital with the bug are aged 85 and older.

Over 11 million Brits have now had their booster jabs, as a result, experts say Covid cases are now falling faster than at any other time this year.

Sarah Crofts, Head of Analytical Outputs for the Covid-19 Infection Survey, said: “There has been a welcome decline in infection rates across both England and Wales, though rates across the UK remain high overall.

“With a marked decrease in infections among secondary school children in England, the half-term break may have played a part, though infections were decreasing prior to this time.

“Over the next few weeks we will see if this decline continues.”


Christmases for the next FIVE YEARS could be ruined by Covid, expert warns

Data from the ONS comes as the R rate once again fell this week, it’s the second week in a row that the rate has fallen after jumping to between 1.1 and 1.3 in October.

An R value between 0.8 and 1.0 means that, on average, every 10 people infected will infect between 8 and 10 other people.

The South West has the lowest R rate and could be as low as 0.7, with every other region being between 0.8 and 1.

Further data from the ONS also shows that around one in 60 people now have Covid-19, opposed to one in 50 last week.

One in 60 is the equivalent of about 925,400 people and is slightly below the proportion who were estimated to have coronavirus at the peak of the second wave in early January, suggesting infection levels are still high.

Dr Mike Tildesley, a member of the Scientific Pandemic Influenza Group on Modelling (Spi-M) told The Telegraph: “In terms of what we’re seeing now, we compare this time November this year with last year, the trajectory is so much better, which then does put us in hopefully a much better position as we move towards the present.

“Hopefully more and more people keep going out to get the booster vaccines if we get high uptake in younger people with vaccines, we should hopefully have a much sunnier outlook as we move towards Christmas.”

But despite a fall in cases and many Brits having come forward for their booster vaccines, England’s Deputy chief medical officer, Professor Jonathan Van-Tam says the trajectory of the outbreak is still unclear and could go either way.

He said: “The epidemiology [nature of the Covid outbreak] is rather uncertain, it could turn for the better, it could also turn for the worst,” he told a briefing.

“And even if it turns for the better in the next couple of weeks, that’s a different question to will it stay for the better between now and the spring.’

“I think we can expect some bumps and twists and turns, but I think right now it is hard to predict them.”

Nadhim Zahawi: How the National Tutoring Programme is helping children all over the country catch up following the pandemic

Ranked: Top B2B websites covering pharma and medical devices in UK and US