Huge queues of masked holidaymakers formed at check-in counters at Heathrow ready for a much-needed break.

Holiday bookings rocketed to three times the normal rate in a mad scramble to nab getaways after the amber list and expensive PCR tests were scrapped.

And industry bosses said this weekend is expected to be their busiest for bookings so far this year.

In a boost for travellers, ministers have shrunk the red list – with Turkey, Egypt, Kenya and the Maldives among those declared Covid safe.

Under the government’s new rules, double-jabbed passengers no longer have to take pre-departure tests before returning to England.

Day two PCR tests after returning home will also be scrapped from the end of October.

The changes have injected new life into the beleaguered travel industry amid a bonfire of the hated traffic light travel system.

PICKING UP THE TAB

Alan French, chief executive of Thomas Cook, said this weekend was expected to be the busiest in bookings so far this year.

He told the Daily Mail: “The news is a shot in the arm for both the travel industry and families up and down the country who are crying out for some much-needed late summer sun.

“Based on our bookings already, I would expect this weekend to be the biggest of the year so far.

“Bookings for October half-term are up more than 200 per cent compared to August as people lock in great prices for beach breaks in their favourite Mediterranean sunspots.” 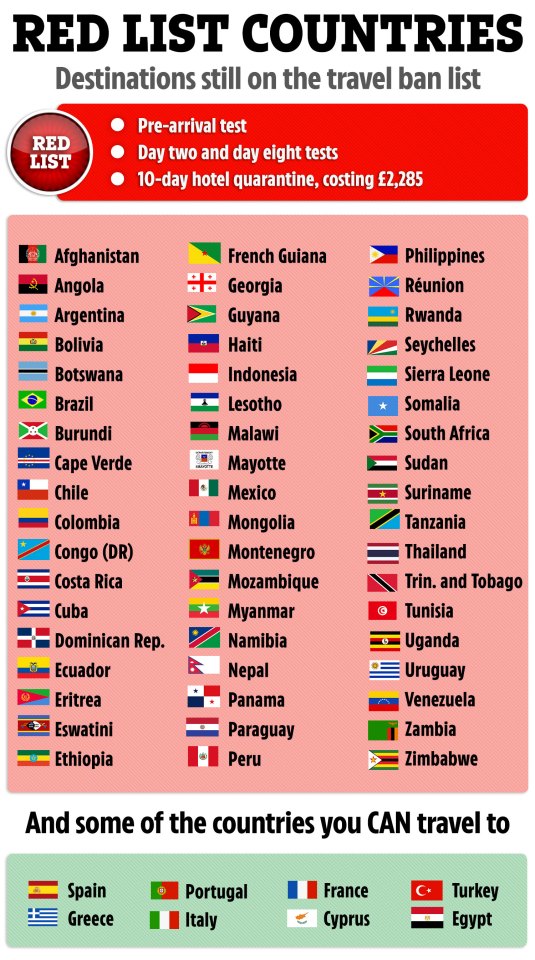 Paul Charles, chief executive of travel consultancy PC Agency, yesterday told The Sun Online: “This is take off for the travel industry.

“In the last two hours the airlines and tour operators are seeing very strong enquiries.

“There has been a pick-up in the long-haul market. With the removal of key countries from the red list, like Kenya, like Egypt, like the Maldives, those will see very strong sales over the weekend.

“The confidence has really returned.”

The relaxation in travel rules was confirmed just before 5pm, but it saw an immediate spike in holiday interest.

Steve Heapy, CEO of Jet2, said: “There has been an immediate and massive surge in bookings for flights and package holidays on the back of this welcome news for holidaymakers in England.”

TravelSupermarket said searches for Turkey package holidays were already its fourth most popular this month – despite only being removed from the red list last night.

Emma Coulthurst, travel advice expert from the holiday price comparison site, told The Sun Online: “It will be an incredibly popular option.”

Managing Director of TUI UK Andrew Flintham said: “We’ve already seen an uptick in bookings for Turkey in October and a big increase in bookings for those looking to enjoy some winter sun.”

But he called for the red list to be slashed further “given no variants of concern have been identified”.

Following the mega announcement, shares in easyJet and Wizz Air also went through the roof and shot straight to the top of the FTSE 250.

Travellers returning from red list countries must currently quarantine for 10 days in a government-approved hotel costing £2,285.

But from October 4 ministers are simplifying the messy traffic light system to a simple Go/No Go list, as already revealed by The Sun.

The current amber and green lists will merge into one “rest of of the world” Covid safe list.

Eight of the 62 countries currently on the red list are being taken off, with a view to keep stripping more destinations over the coming weeks.

Turkey, Egypt, the Maldives, Sri Lanka, Oman, Bangladesh, Pakistan and Kenya will all be struck off the red list next Wednesday at 4am.

It means fully-vaxxed holidaymakers will finally be able to take a break in these places without forking out thousands for hotel quarantine.

Transport Secretary Grant Shapps said the changes are locked in until the New Year – meaning Christmas breaks are safe.

From the end of October, double-jabbed travellers can swap PCR tests for cheaper lateral flow swabs on day two of their return – shaving about £100 off the price of holidays.

Brits won’t be able to use the free NHS kits though and must fork out £30 for supervised swabs.

Pre-departure tests for those returning to England will also not be needed if you’re fully-vaxxed. 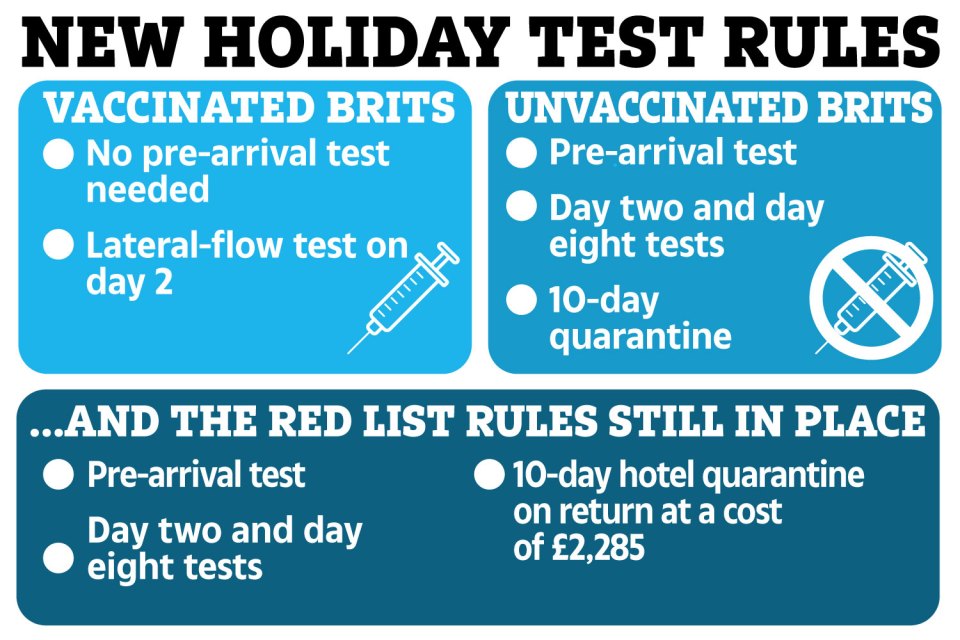 Bread and butter pudding recipe from the Batch Lady

Hancock fires back at Cummings’ allegations