SIR Richard Branson has declared “the dawn of a new space age” after successfully blasting off on a groundbreaking space mission.

The 70-year-old made history by beating Elon Musk to become the first billionaire in space, before safely returning to earth in his Virgin Galactic rocket plane.

The British entrepreneur described the hour-long space flight as “the experience of a lifetime” and “more magical than I had ever imagined”.

He added: “How you feel when you look down on Earth is impossible to put into words, it’s just indescribable beauty. I can’t wait for you all to get up there.”

He congratulated his “wonderful” team for their “17 years of hard, hard work to get us this far”.

He and his crew reached heights of 53 miles during today’s mission to the edge of space.

They completed a runway landing just 20 minutes after the craft detached and were greeted with cheers and hugs.

He had been due to set off first thing this morning in the New Mexico desert, but a tropical storm delayed his lift-off.

‘EXPERIENCE OF A LIFETIME’

During the trip, Sir Richard experienced weightlessness for several minutes before re-entering the earth’s atmosphere.

Sir Richard was earlier seen striding out in his blue spacesuit with three other Virgin execs and their two pilots – including British ex-RAF airman Dave Mackay.

The VSS Unity soared to 50,000ft, led by a specially designed massive mothership, known as Eve, or WhiteKnightTwo.

After detaching from the spaceship, Unity fired up its hybrid rocket engine and soared into space.

Eve had taken off along a 2.4mile runway before VSS Unity detached and ignited its engine.

He was pictured arriving at a base in Las Cruces, New Mexico today[/caption]

Hitting speeds of up to 2,300 miles per hour – three-and-a-half times the speed of sound – it blasted to an altitude of 50-odd miles, or the edge of space.

Although there is debate over what qualifies as space, with Amazon boss Jeff Bezos believing its threshold stands at 62 miles above earth.

Messages of congratulations flooded in after Sir Richard and his team landed safely back on earth and he became the second-oldest spaceman in history.

The Chief of Space Operations for the US Space Force, Gen. Jay Raymond, said: “Your years of hard work & dedication paid off today with a flawless flight to the edge of space.”

And the actor who played Sulu in Star Trek said: “Congratulations, Richard Branson, on your successful flight today. The future of space tourism is now.”

Sir Richard had downplayed any potential danger before today’s mission.

“We’ve spent 17 years working on this project, with astounding input from nearly 1,000 engineers and brave test pilots,” he told The Telegraph.

“I’m a pretty fearless person and in this case I’m far more excited than worried. I got the risky adventures over with when I was younger.”

He’s also described his spouse Joan, 73, as “the most understanding wife on Earth” and will take photos of his parents, children Sam and Holly, five grandchildren and friends’ loved ones on board with him. 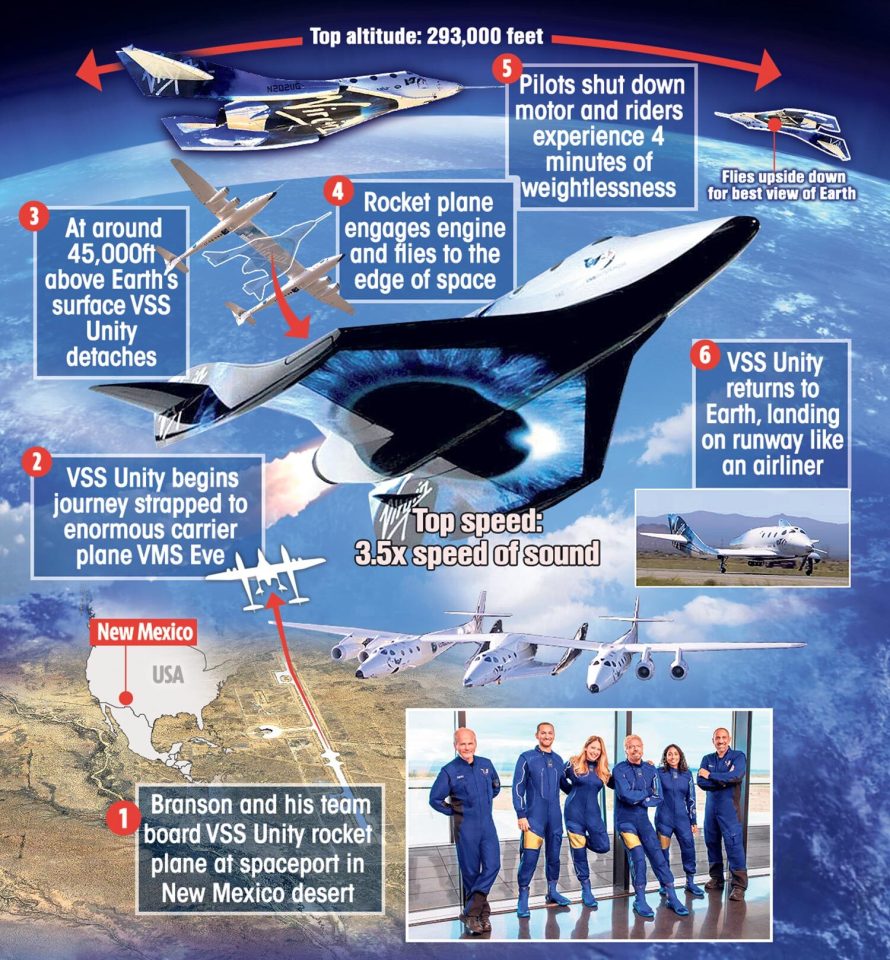 As they landded, there was a live performance from ‘Young, Dumb & Broke’ singer Khalid.

It comes after a tropical storm delayed Branson’s lift off this morning.

A Virgin Galactic spokesperson earlier told the Sun Online: “Due to weather overnight at Spaceport America, vehicles were delayed leaving the hanger.

After landing, Branson and his crew spent a private moment with their families before attending a press conference to talk about their giant leap.

We are here to make space more accessible to all and turn the next generation of dreamers into the astronauts of today and tomorrow.

He beat his billionaire rival Bezos – who is set to blast into space on the anniversary of the Moon Landing.

Despite Bezos wishing Branson luck, his Blue Origin space company threw shade at Virgin Galactic on the eve of the voyage – by claiming the Brit was not actually going into space.

Scientists are divided on whether space begins at 50 miles up – which Branson will breach – or 62 miles, which he will not get to.

The 62-mile mark – known as the Karman line – is internationally recognised as the beginning of space, whereas NASA believes that it is anyone going above 50 miles.

Blue Origin wrote that its spacecraft would fly above the Karman line, adding snottily: “None of our astronauts have an asterisk next to their name.”

But Branson’s other billionaire rival, Musk, confirmed he would be attending the Virgin Galactic launch.

And he he has bought a ticket on his rival’s spaceship, Sir Richard told The Sunday Times.


When is Richard Branson's Virgin Galactic space launch and how can I watch it?

OF MEAT AND MEN

OUT OF THIS WORLD

ONE GIANT LEAP FOR BRAN-KIND


Here's how Richard Branson will fly to SPACE this weekend

The launch was hailed a “landmark moment” for the billionaire businessman, as well as the whole commercial space industry.

He said after his historic flight: “We are here to make space more accessible to all and turn the next generation of dreamers into the astronauts of today and tomorrow.”

He also paid tribute to scientist Stephen Hawking, who he said it was an “honour” to know.

A test pilot lands near the Virgin Galactic hangar complex a day before billionaire entrepreneur Richard Branson travels to the edge of space in the company’s passenger rocket plane VSS Unity, near Truth or Consequences, New Mexico[/caption]

The Operations Center of Spaceport America[/caption]

Proud mum shares freezer full of meal prep – but gets blasted for cooking for son, 30, who doesn’t even live with her

What publishers need to do now to protect online advertising revenue