INVASIVE “crazy worms” that move and jump like snakes are swarming the United States, according to research.

Scientists found that the tube-like creatures are now present in at least 15 US states after making their way to North America in 2013. 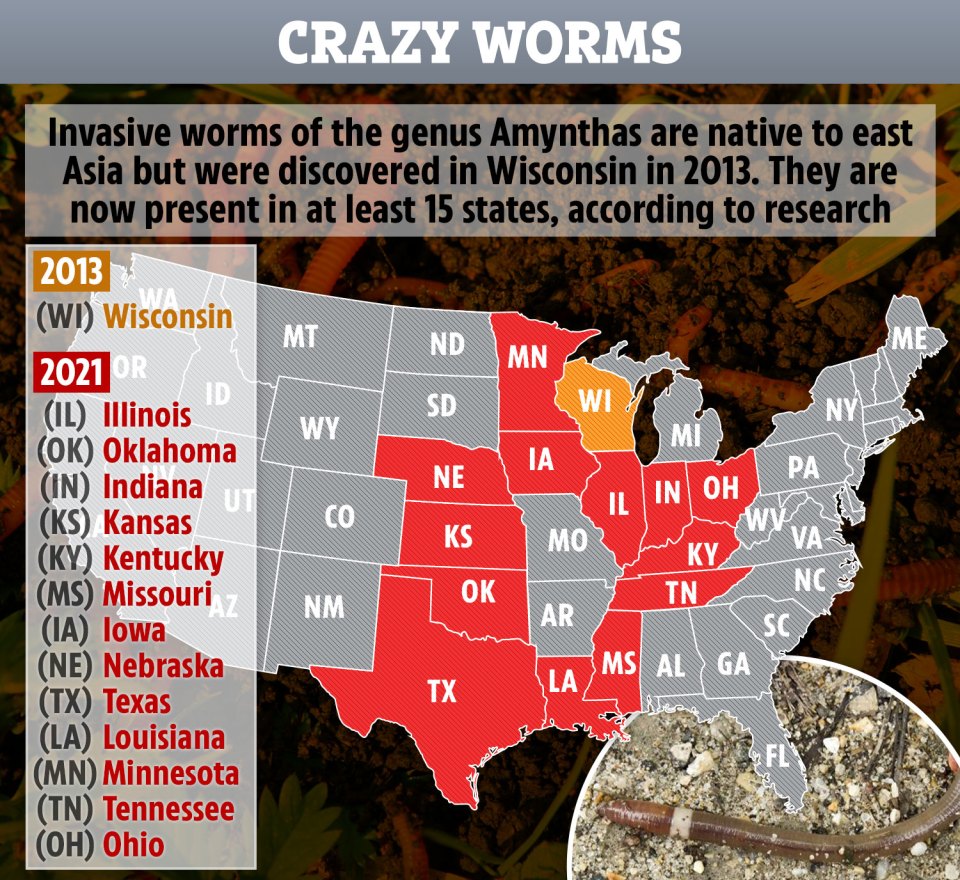 The finding spells bad news for the nation’s forests, as the invaders have an insatiable appetite for soil nutrients that native plants need to grow.

The worms of the genus Amynthas – also known as snake worms and Alabama jumpers – are extremely invasive.

The animals are native to east Asia and resemble the common earthworm, but are smaller and brown, growing up to five inches long.

They’ve earned the nickname “crazy worm” due to their tendency to violently thrash when picked up, sometimes jumping from the hands.

The wrigglers are even know to shed their own tails in a desperate bid to evade the grasp of their captors predators.

Scientists first recorded the worms in Wisconsin in 2013, though they’re believed to have been brought over in the 19th Century as fishing bait.

Researchers analysing the spread of the slimy beasts have now found they’re present in more than a dozen states, TV station KTVI reported, according to NewsWeek.

Citing specialists from the University of Illinois, the report confirmed that the invasive worms were recently discovered in Peoria County.

Researchers last week warned of the devastating effect that the intruders have on local plant and wildlife.

“This is especially a concern in our forests, where organic matter is limited. It is important to stop the spread of jumping worms.”

The worms grow twice as fast as other species due to their voracious appetite for soil nutrients, Flowers-Kimmerle added.

She said that they reproduce without mating and “damage roots severely, causing weaker plants that are more susceptible to pests, drought, and disease.”

The Wisconsin Department of Natural Resources says that crazy worms are brown/grey with a white band called clitellum encircling their body.

Population control is a huge problem, and experts have conceded that there is no viable solution to the creatures’ rapid spread.

Their egg casings last throughout the winter and aren’t easy to spot hidden in the soil.

If you find crazy worms in your back yard, the best course of action if to place them in a plastic bag and leave them out in the sun for 10 minutes.

Flowers-Kimmerle wrote in the blog: “Removing adult jumping worms to decrease the number of egg casings produced is the best control available at this time.

“Adults placed in plastic bags and left in the sun die quickly. Dispose of the bag in the trash.”


China building 'knock-off Starship' that will whisk passengers around Earth


Pink Moon April 2021: What time and how to see in the UK and US tonight

In other news, Instagram users have been left disgusted with the new design of the app.

And, here are 10 secret Google Maps locations you’re not allowed to see.

Are you worried about the spread of jumping worms? Let us know in the comments…

The UK’s urban riots 40 years on

What does three RED ticks on WhatsApp mean and is the Government spying on you?